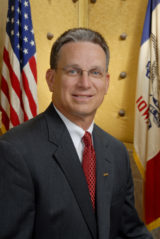 An innovative program that helps dispose of wastewater from the North Iowa Landfill is saving money and earning accolades.

Last year, the landfill constructed a system to take leachate – also known as garbage water – out of the landfill via a pipeline that connects to a municipal wastewater reclamation plant.

The $1.7-million project was paid for by member dues and tipping fees.

Prior to the pipeline, 6,000-gallon tanker trucks had to cart the leachate to Mason City's water reclamation facility at least twice a day.

“It’s an example of two groups getting together, working out the details and solving a problem, and it sounds like they did a very good job,” State Sen. Jerry Behn, R-Boone, told Iowa City Today.

“When they were bringing in truckloads, that’s a relatively large volume. The pipeline makes sense. It’s a smooth, steady flow, a small volume at a constant rate,” Behn said, adding that the pipeline presents a significant cost savings on transportation.

Landfills are mandated by the state Department of Natural Resources (DNR) to have a collection system for leachate so that it does not seep into the groundwater.

Landfill director Bill Rowland told the Globe Gazette that prior to the pipeline, the annual cost for leachate removal was roughly $400,000.

From the fall of 2018 until the end of September 2019, the pipeline handled 6.57 million gallons of leachate. Rowland estimated that the new system saved the landfill nearly $350,000 in its first year, or about $950 a day in handling and removal costs, and should pay for itself in the next few years.

The Solid Waste Association of North America’s Iowa branch recently recognized the landfill for its exceptional leachate program, and the greenhouse gas reduction that’s resulted since it stopped using trucks for leachate transport also adds to its success with the DNR.

“It’s a win-win for everybody,” Behn said.

Want to get notified whenever we write about Iowa Department of Natural Resources ?

Sign-up Next time we write about Iowa Department of Natural Resources, we'll email you a link to the story. You may edit your settings or unsubscribe at any time.